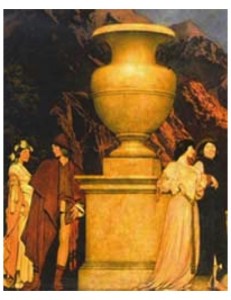 Stolen From: A private gallery

Born in Philadelphia, PA, Maxfield Parrish was a prolific American painter and illustrator working in the first half of the 20th century. His artistic career lasted for more than half a century, and to a great extend shaped the future of American visual arts. He is known for his distinctive saturated hues and idealized neo-classical imagery. His luminous paintings, portraying blue waters and skies, rocks and hills, and radiant beautiful young women in flowing classical robes are infused with peaceful romantic quality. The color Parrish blue was named in acknowledgement of his painting technique.

These paintings by Maxfield Parrish were originally painted in 1914 for the Long Island estate of Gertrude Vanderbilt Whitney. They were part of a series consisting of 6 paintings, including the two that were stolen.  They were 7ft high and 8ft wide. These were the largest works Parrish ever produced. They depict a party scene, with people dressed up and having a wonderful time.

The thieves enter by cutting a hole into the roof. From there they entered into the drop ceiling where there was access to the alarm system, which they disarmed by stripping the wires and shorting out the electrical system.  Then they intentionally set off the alarm system and the police and security teams responded. In fact, during a 12-hour time span, they set off the alarm eight different times, with the police and security teams responding each time. By the afternoon of the next day the paintings were still in place and the police, the security team and the alarm company all assumed it was a faulty alarm system.  It was then that the thieves cut the paintings out of their frames and took them out through the hole in the ceiling.

It is thought that these paintings were targeted, since the thieves only took these two works and left other paintings also worth millions.  What is unknown is why those two specific panels were taken.  The value of the works is estimated at $4.5 million.