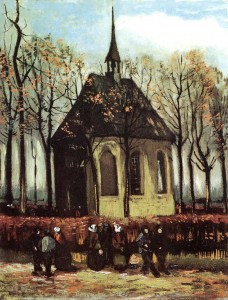 Vincent van Gogh created virtually all of his works during a period that only lasted for 10 years. However, during those years, he produced nearly 900 paintings and over 1,100 works on paper. He started painting at the age of 27, and though he had relatives working as art dealers and painters, he was mostly self-taught.

In 1882, he moved to the Hague to receive some instruction and then to the Antwerp Academy in Belgium.  For two years he lived with his brother in Paris, and it was during those years that his artistic style, after being inspired by the Impressionists, changed drastically. His color palette lightened up and he started to employ his signature brush strokes.

In 1888, he moved to Arles in the South of France, where he hoped to establish a community of artists.  At one point, Gauguin came to live with him, but it was a difficult relationship, and eventually Gauguin departed. Apparently, it was Gauguin’s hasty exit that led to van Gogh’s mental break down and his eventual commitment to a mental asylum in Saint-Remy.  His year spent in the asylum was one of his most prolific, resulting in his Cyprus and flower works. After leaving the asylum he moved to Auvers-sur-Oise, where he was cared for by his brother Theo and Dr. Paul Gachet.  However his depression, deep despair and hallucinations resulted in his shooting himself in the chest. He died two days later on 29 July 1890.

This small canvas was painted at the beginning of 1884 for Van Gogh’s mother. The church in the picture is the one where his father had become pastor in 1882. X-rays show that initially there were no human figures in the painting except for a peasant with a spade. Later, probably not before the autumn of 1885, Van Gogh added the members of the congregation. He also added autumn leaves to the original bare, wintry trees, which made the picture somewhat more colorful. It is not entirely clear why Van Gogh over painted a part of the scene. The woman in the center of the foreground, who is dressed in mourning, may provide a clue. The artist’s father died in the spring of 1885, and Van Gogh may have intended these changes to connect the painting more closely with his dead father and thereby to update it, as it were, for his mother.

The highest price paid at auction for one of his works was $87,500,000 for a painting titled Portrait du Dr. Gachet.  Other major works of Van Gogh’s have sold for prices between $1million and $70million.

The work was part of the permanent collection of the Van Gogh Museum in Amsterdam. Just before 8am on the morning of 7 December 2002, burglars smashed a window and entered the museum. Even though the alarm was immediately set off and the museum security and police were on the scene quickly, the thieves were able to get away with two famous works — View of the Sea at Scheveningen (1882) and Leaving the Reformed Church in Nuenen (1884).  During the inspection of the museum the police found a broken window one story above street level, a rope, a 15-foot ladder leaning against the rear of the building and a large cloth.